Due to the sensitive nature of rescue work some of our horses are not listed on our website.  Occasionally there are cases where photo ID will be requested in the beginning phases of adoption inquiries to ensure safe placement of our horses.

BOJANGLES
Breed: Pony of the Americas       Sex: Gelding       Foaled: 2010      Age: 10       Height: ~12hh
Suitable for: Companion
Limitations: Visually impaired but can see well enough to get around without a problem.
Personality/History: Bojangles came with two of his brothers, Cosmo and Pistol.  He has reportedly had a lot of groundwork prior to coming but has not been backed.  Due to his poor vision he was a little spooky at first but now he is very comfortable with his surroundings.  Bojangles loves to visit with people and gets along very will with the other ponies in his pasture.

Personality/History:  Buckshot is a transfer from Kentucky through a partnership with the Kentucky Equine Adoption Center.  He was rescued from the feral strip mine horse herds in Kentucky because he had a significant wound to the left side of his face.  This resulted in the removal of one of his molars.  Once he arrived at Horses' Haven our vets examined him and determined that he required additional surgery to repair an area of his jaw that had not fully healed.  He is now on the mend and has been the best little patient ever!   Though he was feral only a few months ago he will accept a saddle and had started accepting a rider, with no issues,  down in Kentucky.  As he goes through his recovery here he continues ground work training, catches on very quickly and will make a stunning riding pony who would do very well in hunter/jumper or dressage.  He loads and travels very well, is easy to handle for vet and farrier and is so very sweet.

Cosmo came with two of his brothers, Bojangles and Pistol.  He is a beautiful pony who started out quite shy.  With consistent handling he is getting more and more comfortable with touch and grooming.  Right now we are working with him on handling his feet as he is a little worried about lifting his feet for the farrier and is making good progress.  He is still a little fearful of touch and will move away but absolutely loves being around people and will follow them all over the pasture.  In-hand he leads well but can be a little spooky on his blind side.  Cosmo would love to find a home with a family that will take the extra time to win him over and show him how wonderful TLC is!

DANNY-Adoption Pending
Breed: Pony of the Americas       Sex: Gelding       Foaled: 1994       Age: 26       Height: 11hh
Limitations: Blind
Danny is a POA (Pony of the Americas) with an approximate foal date of 1997. He is completely blind and came to Horses' Haven because he was being picked on by the other horses at his previous home. He couldn't see trouble coming and defend himself. Not fair! Now he shares a pasture with our mini donkeys who wouldn't dream of picking on him. 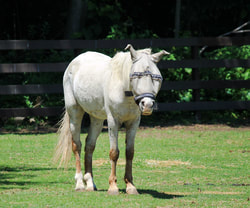 HEIDI is available for sponsorship
Heidi is a pony mare foaled in 1985. She came to Horses' Haven in Nov. 2008. Her owner's children had outgrown her and they didn't want her any more. Here she has lots of "kids" to look after since she hangs out with many of our goats and she is definitely wanted. Heidi went blind before arriving, but you'd never know it by the way she gets around her pasture so well. 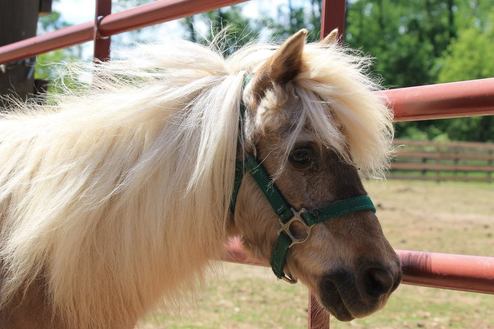 RASCAL is available for sponsorship
Rascal is a Palomino mini gelding foaled in 1993. He came to Horses’ Haven with his friends Echo and Isabelle after their owner passed away. Rascal was very well cared for, but is very shy and has recently lost his sight due to a metabolic syndrome.